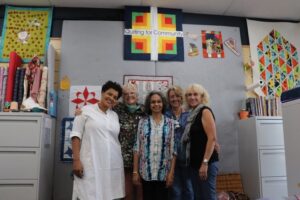 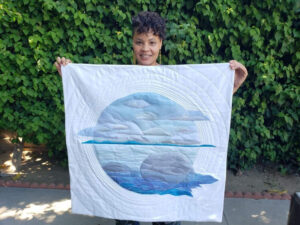 Lizz Leral is the Executive Director and President of Quilting for Community (Q4C), a local non-profit based in Northridge and has been a proud resident of Northridge for almost 11 years. Moving from Brooklyn, NY, Lizz and her husband sought to live in an area of Los Angeles that was far enough from the hustle and bustle of city life, but central to the beach, hiking trails, cultural institutions and everything else that the city has to offer. They were immediately drawn to Northridge Village because of the walkability of Reseda Boulevard, friendly neighbors, community of small businesses, and CSUN.

Quilting for Community, a non-profit 501c3, began in 2017 as an idea with just three people and has grown significantly since its founding. Quilting for Community’s mission is to build community through quilting, with the teacher, the maker and the quilt recipient all playing a role in making that mission work. Q4C maintains that teaching someone a skillset empowers that person physically, mentally, and emotionally. Members believe that giving quilts empowers those who may have once felt forgotten, alone and insignificant, and that receiving a quilt is akin to a warm embrace. While there are many ways to build community, quilting just happens to be Q4C’s way.